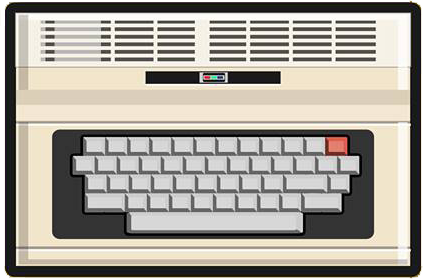 The TRS-80 Micro Computer System (TRS-80; later known as the Model I to distinguish it from successors) is a desktop microcomputer launched in 1977 and sold by Tandy Corporation through their Radio Shack stores. The name is an abbreviation of Tandy/Radio Shack, Z-80 microprocessor. It was one of the earliest mass-produced and mass-marketed retail personal computers.

Notable features of the TRS-80 included its full-stroke QWERTY keyboard, its new Zilog Z80 processor (rather than the more common Intel 8080), 4K RAM standard memory (many 8-bit computers then shipped with only 1K RAM), small size and desk footprint, its floating-point BASIC programming language, an included 64 column video monitor, and a starting price of US$600 (equivalent to US$2400 in 2017).

An extensive line of upgrades and hardware peripherals for the TRS-80 was developed and marketed by Tandy/Radio Shack. The basic system could be expanded with up to 48K of RAM (in 16K increments), and up to four floppy disk drives and/or hard disk drives. Tandy/Radio Shack provided full service after-sales support including upgrade, repair, and training services in their thousands of stores worldwide.

By 1979, the TRS-80 had the largest selection of software in the microcomputer market. Until 1982, the TRS-80 was the best-selling PC line, outselling the Apple II series by a factor of 5 according to one analysis.

In mid-1980, the broadly compatible TRS-80 Model III was released. The Model I was discontinued shortly after, primarily due to stricter FCC regulations on the radio-frequency interference it caused in surrounding electronics. In April 1983 the Model III was in turn succeeded by the compatible Model 4.

As well as the original Model I and its compatible descendants, the TRS-80 name was later used as a generic brand on other technically unrelated computer lines sold by Tandy, such as the TRS-80 Model II, TRS-80 Model 2000, TRS-80 Model 100, TRS-80 Color Computer and TRS-80 Pocket Computer.
* Information provided by Wikipedia